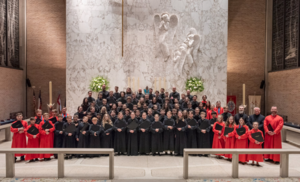 Click headline to read more...
The Chorister's of the Madeleine Choir School partner with several organizations each year, in addition to executing their own concert series and tour of an international or domestic destination. The choristers were thrilled to have completed a very successful tour of Dallas, Texas that included performances at St. Thomas Aquinas Catholic Church, St. Michael and All Saints Episcopal Church and St. Rita's Catholic Church, January 24-27, 2020.
Additionally, we were thrilled for the opportunity to join several Utah based arts organizations in the presentation of "The Way of the Rain" at the United Nations Civil Society Conference, hosted by Salt Lake City at the Eccles Theater on August 26, 2019.  The 2019-2020 School Year also holds a partnership for MCS with Utah Symphony in December and March.
In November 2018 the choir performed in several cities in Italy, including their last stop in Rome.  Addtionally, our choristers played key roles in the Utah Opera's production of The Little Prince with MCS chorister, Tai Fluchel, in the lead role, as well as three MCS choristers who played the roles of the Three Spirits in their production of The Magic Flute.
Next up for the choir in their home space of the Cathedral of the Madeleine are the Cathedral Family Concert Series on February 21 and the Founders' Day Concert onMarch 22.  Click here for details and ticket requirements along with a complete listing of our concert season.
A major part of the mission of The Madeleine Choir School is the choir's service to the Cathedral of the Madeleine at daily Mass.  We welcome all to join us for the Mass celebrations and for our many other performances.
Thank you for supporting The Madeleine Choir School! We hope to see you soon!
https://www.utmcs.org/apps/pages/index.jsp?uREC_ID=290842&type=d&pREC_ID=669868